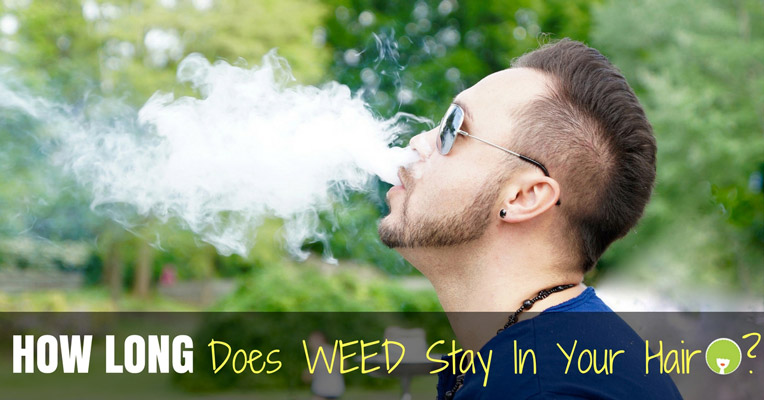 Weed, marijuana, Indian hemp, Cannabis Sativa or any other common name used, is one of the oldest and most common drug in the world today.

The existence of weed has been there for centuries with a documented history of ancient communities using weed for various different purposes.

In a nutshell, weed is a brown, grey or green mixture of dried and shredded leaves, seeds, flowers or even the stem of the Cannabis Sativa plant.

Weed exists in many forms and thus it can be smoked or ingested orally like in weed cookies but all having the same psychoactive effect.

While there are a number of components present and active in weed, the main component is what is commonly referred to as THC or tetrahydrocannabinol.

THC is what is normally tested during a drug test as the remnants of this compound can be traced not only in your hair, but also in urine, saliva and even in the blood when tested immediately after use.

Why is hair tested for weed?

When one takes weed, the body has got tissues that absorb the main component which is THC.

The absorbed THC stays imbedded in the body tissues for an extended period of time and long after one has stopped feeling the effects of weed.

One of the tissues that absorb THC is the hair follicle tissues. For this reason, a hair follicle test is normally conducted in order to detect the presence of THC in your hair.

Hence, before asking how long does weed stays in your hair, it is important to, first of all, know what a hair follicle test is.

This is because the metabolite of weed which is THC binds itself in the hair follicles in about five days after use and can stay there as long as 90 days.

How does this test work?

The hair follicles are the tissues responsible for hair growth. Thus, when these tissues absorb the THC metabolite through blood, they deposit them in the hair on any part of your body.

The more you smoke weed, the more the metabolites are deposited in your hair and this virtually keeps a record of your uptake of weed. Actually these hair follicles drug tests can reveal your weed uptake pattern showing when you started using weed and when you stopped.

During a hair follicle drug test, a sample hair of 1.5 inches in length is used. This is the average length that normal hair grows in three months and so the test will be able to detect use of weed in the last 3 months since the date of the test.

How long does weed stay in your hair?

This is one of the most prevalent questions among people who need to know more about drug tests and how they are conducted.

Before we venture into answering this question straight away, it is important to first of all understand the nature and other types of related tests.

Nowadays drug tests are a common thing, with employers conducting regular drug tests and it is no longer a thing for the athletes only.

The drug tests conducted are for various reasons and done in different ways, individually or as a complementary test for another drug test.

One of the most common test for THC is a urine test. In fact, urine test is considered more accurate and cheap. Some of the THC metabolites are absorbed or cleaned from the blood system by the liver and later passed out in urine.

Thus, anyone taking weed will have traces of urine on the urine for up to seven days depending on other factors such as weight, metabolism and longevity of usage. THC can also be traced on saliva as well as blood.

Blood test for THC is not very common because these tests can only find traces of THC for a person who has used weed and no more than 5 hours have passed.

How Long Weed Stays in Your Hair can be Answered in Two Different Ways:

As stated earlier, the hair drug test was meant for long-term and frequent weed users. In this case, you won’t pass the test for sure.

if you are a one-time user, it is quite hard to detect the weed traces in hair due to the small quantities. However, it is still very much detectable.

So if you are a one-time user and take weed 3 months prior to the test chances are very high that you will beat the test and it won’t be detected, since the 1.5-inch hair sample taken will not have weed residue in it.

If you don’t use weed for last three months, but in last 4 days before the test, you got some. You will beat the test because THC takes 5 days to deposit on your hair follicles

#2: HOW LONG WEED STAY IN YOUR HAIR

The second answer to this question is that weed stays in your indefinitely.

Once you take week and the THC metabolite is absorbed and deposited in the hair, it stays there until you cut the hair.
For frequent users it is much easier to trace weed in hair and the THC residue might stay in your hair for up to 12 years. Effects of weed in your hair

The Federation of American Societies for Experimental Biology in 2007 completed a study on hair and the effects of cannabis on hair and they had two main conclusions.

First of all, THC deposited in the hair stem inhibits the elongation or growth of the hair shaft.

Secondly, THC also suppresses the distribution of hair follicle proteins. The end result for all the above is stunted hair growth or baldness in severe cases.
In another case, research by the University of Amsterdam, though not yet published, suggests that use of weed affects hair growth in two ways.

First it is through hormones. It is quite evident that cannabis disturbs the hormonal balance of various hormones in the body and this may affect hair growth through induced stress among other things.

Weed is a widely popular drug with its use justified for a number of reasons. The effects of weed to the body are adverse and extensive. It is clear, as demonstrated above that deposits of weed can be found in your hair, whether head or body hair.

The traces of weed on hair are found in very small amounts and there is no proven way of getting rid of those traces other than shaving all the hair. Weed also affects hair growth and is generally not suitable for the health of hair.

healthstylehub.com is a participant in the Amazon Services LLC Associates Program, an affiliate advertising program designed to provide a means for sites to earn advertising fees by advertising and linking to Amazon.com
Amazon, the Amazon logo, AmazonSupply, and the AmazonSupply logo are trademarks of Amazon.com, Inc. or its affiliates. As an Amazon Associate I earn from qualifying purchases.