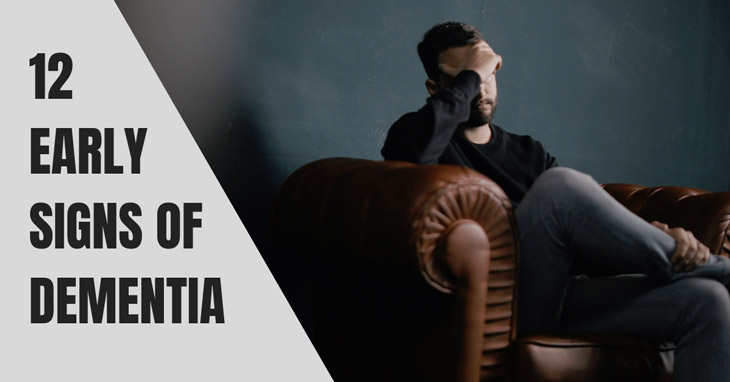 12 Early Signs of Dementia You Should Never Ignore

Is someone you care about displaying strange behavior? There could be a serious problem. Here are 12 early signs of dementia you need to watch out for.

When dementia hits, its effects can strike hard. Fortunately, if caught in their early stages, the effects of dementia can be slowed.​

How do you catch dementia effects in their early stages? By looking for particular indications. Here are 12 early signs of dementia you should never ignore.​

There is no shortage of dementia symptoms. Common symptoms which present themselves can be mental, physical, and emotional. They are as follows:

1. Not Knowing How to Do Common Tasks​

One of the most common signs and symptoms of dementia is not knowing how to perform tasks which you once performed with ease. These tasks can include anything from starting up the dishwasher, to writing your name, to unlocking a door.

This symptom will start out small. Perhaps you'll forget how to get to a familiar location. However, over time, it will grow worse, resulting in you having trouble with the simplest of tasks.​

Another early sign of dementia is trouble doing basic math. If you struggle to count change or add basic numbers that you could have easily added at an earlier point in your life, dementia could very well be affecting you.

Often, this inability to perform basic math can result in uncharacteristic budgeting and spending. Should your money habits change substantially from what they once were, it would be wise to see a doctor. Learn more about Alzheimer's and dementia care.​

Typically, the very first symptom someone notices when dementia is setting in is short-term memory loss. This is the phrase used to describe the act of forgetting things that happened within the last 30 seconds.

An example of this would be forgetting who you just saw on TV right before you left a room. If your recent memories seem to be disappearing into a void, you are likely experiencing short-term memory loss.​

A common situation that you'll often notice with dementia patients is placing items in peculiar places. For instance, a dementia patient might get milk out of the fridge, pour himself a glass of milk, and then put the milk jug away in the cupboard instead of the fridge.

If you or someone you love is doing things such as this without any realization of the fact, dementia could very well be at play. Everyone does absent-minded things every now and then, but if you're doing them on a regular basis, something is awry. Stopping abruptly in the middle of sentences. Struggling to find words that were once found with ease. These are common symptoms of early dementia.

Unexplained mood swings are also very common among dementia patients. For example, someone who has always been very cheery might suddenly begin acting bitter and cynical. Anxiety, confusion, and fear are typically associated with the disease as well.

Do you find yourself wanting to go out less and less? Are you speaking less with those in your household? If so, a number of factors could be contributing.

However, you should know that this is one of many early dementia signs. Often times, those affected with the disease will begin to feel shame over their lack of social function. This shame will then cause them to isolate themselves, ensuring that they aren't subjected to any form of humiliation.

8. A Sudden Onset of Depression

If you suddenly begin suffering from depression late in life, there is a very good chance that dementia is to blame. Dementia carries with it a host of environmental and chemical factors.

One of the most prominent characteristics of dementia is poor decision-making. Affected individuals will often make poor decisions due to a lack of memory and understanding.

An example of a poor decision brought on by dementia would be spending thousands of dollars on something that you can't realistically afford.

Not all of dementia's symptoms are psychological or emotional. One physical symptom of dementia is muscle weakness.

Muscular weakness typically accompanies vascular dementia, a form of dementia which is physically characterized by differing forms of body paralysis.

Another of the many dementia symptoms is having difficulty with planning. Dementia patients will often make plans despite the fact that they already have different plans in place.

They might even try to make plans for a specific activity at a time which is not appropriate for the said activity. For instance, they might suggest going golfing at 9:00 PM despite the fact that it's going to be dark outside.

One last symptom that's associated with early dementia is complications with vision. Those affected typically have trouble with depth perception and spatial awareness as well as with telling colors apart. Though vision can be distorted by a number of health issues, dementia is most certainly one of them.​

What is Blood Blister on Nipple? - A Quick Guide to Common Breastfeeding Problems

The Best Fetal Doppler For 2020

What You Need to Know About Choosing a Medigap Policy

Hi there, I'm Allen I'm a health professional with a strong passion for health and healthy recipes. There's a fine line between love and hate, but the divide between weak and strong health is as vast as the Pacific Ocean. Through HealthstyleHub, we strive for empowering our followers to have the knowledge to archive better hair and healthy life.